Jeremiah 29:11 says, according to the New International Version of the Bible, “’For I know the plans I have for you,’ declares the Lord, ‘plans to prosper you and not to harm you, plans to give you hope and a future.’” 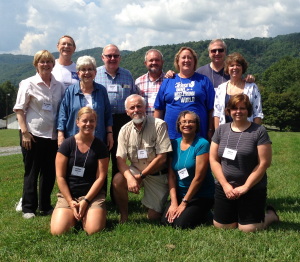 The first West Virginia Institute for Leaders in Ministry class was held in early September, a program that is being led by Marylyn Huff and Sam Hobson of the Pastors’ Institute.

That in a nutshell is the backbone to the new West Virginia Institute for Leaders in Ministry program that is still in the ground-floor stages at the Presbytery of West Virginia. Designed to help ministers and educators gain valuable leadership skills, the ILM broke ground with a weekend meeting in early September. It was the first of a scheduled eight monthly retreats around the presbytery that includes nine leaders from the state and two facilitators from the Pastors’ Institute in Asheville, N.C.

Originating from a presbytery-wide mission study, it was decided that a leadership development program would be beneficial for the leaders in the Presbytery of West Virginia. It was then further agreed upon that creating an in-house presbytery-based program would be more cost effective for everyone involved.

“We had a task force that studied a way that we could lift up leadership development within this presbytery,” recalled Palmer, who is overseeing the program. “We looked at a lot of different programs and models that exist within the denomination. We reached out to pastoral leaders (i.e. teaching elders, commissioner ruling elders and Christian educators) realizing that they have limited continuing ed funds. We thought, “Why can’t we do our own leadership development effort right here in the presbytery?’”

One key aspect of the program is embracing the “Appalachian culture” that is present within the churches of the Presbytery of West Virginia. That is something Palmer and the others felt could be best embraced with a leadership development team that has roots in West Virginia.

Palmer described one aspect of “Appalachian culture” as a spirit of independence that is evident within the state. A second dynamic is poverty, something that has come from a history of outside companies coming into the state and taking its assets, then leaving the communities stripped of their resources and struggling to get by, Palmer said.

“There is almost a suspicion of outsiders who don’t understand Appalachian culture,” Palmer added. “But on the positive side, these people in Appalachian culture are very enamored in loving the Lord, and they are respectful of pastoral leaders who are called to serve the churches. There’s a great reverence that exists within the culture. Pastoral leaders are seen as leaders within the community.”

West Virginia’s ILM was designed and is led by Marylyn Huff and Sam Hobson, who are trained facilitators at the Pastors’ Institute in Asheville, N.C., which is also part of Appalachia and familiar with its culture. Hobson even once served in the presbytery as a pastor at Point Pleasant Presbyterian Church, creating a comfort level for all involved.

“The leaders are very skilled and experienced in leading this Institute for Leaders in Ministry,” Palmer said.

The initial meeting of the ILM went “wonderfully,” according to Palmer, with the group taking a personality test in order to get to know each other better while also doing plenty of worshipping and praying. Styles of leadership were also discussed and compared.

“We shared our faith stories,” Palmer added. “That was very moving to hear how God has moved within the lives of each of these individuals. And the leaders encouraged us to share our faith stories within our churches. And for some of us they thought, ‘Oh, wow, I never thought about doing that.’ It seems like such a commonsense thing to do.”

The ILM meets monthly on a select Friday and Saturday at rotating conference centers in the presbytery. It currently includes nine leaders from around the presbytery who will meet for eight months, at which time the hope is that after an evaluation period a new crop of leaders will come on board for a second round of teaching. Originally, an open invitation was given to all of the churches in the presbytery to help create the initial ILM, with some leaders also being hand-picked to help kick-start the program.

The West Virginia ILM was made possible partly through a New Initiatives Grant from the Synod of the Trinity, which gave $10,000 to the program to help it get off the ground.

“That expression of partnership was so appreciated,” Palmer said. “This Synod really does support the ministry and mission of this presbytery in a very positive way. I’m so grateful for it.”

And in turn, the West Virginia Institute for Leaders in Ministry is hoping to affect the way its leaders and educators are connecting with their congregations in that same “positive way.”