Youth get taste for hunger through 30-Hour Famine

These days, people – especially the younger ones – will say “I’m starving” in order to convey that they are hungry. During consecutive weekends in late February and early March, hundreds of youth got a taste of what it’s like to be without food when they participated with their church youth groups in World Vision’s 30-Hour Famine. From after lunch on Friday until their afternoon meal on Saturday, these teenagers did not eat in order to better understand what less-fortunate children their age go through in other parts of the world. 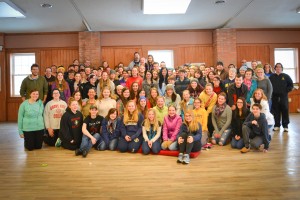 Over 100 youth converged on Crestfield Camp and Conference Center in Slippery Rock for its 30-Hour Famine during the last weekend in February.

While some churches held their 30-hour famines in their own buildings (see Hillside Presbyterian Church in Greenville PA, later in story), over 130 students from 11 Presbyterian churches from the Pittsburgh and Beaver-Butler Presbyteries converged on the Crestfield Camp & Conference Center in Slippery Rock during those two weekends to help raise awareness for hunger. Among the activities the youth did while at Crestfield, which is owned and operated by the Pittsburgh Presbytery, was to go out into the Slippery Rock and Grove City communities and collect food for the local food banks. Some youth also baked cookies and took them out into the Slippery Rock area while others took part in a prayer walk.

“The weekends are always an eye-opening experience for the students and their leaders and also for the Crestfield staff,” said the Rev. Betty Angelini, the executive director at Crestfield. “It never ceases to amaze me how generous the community is providing food to the students who are out in the cold knocking door-to-door and collecting. The students also make blankets and lasagna dinners for the food pantries. They are hungry and tired but push through that and give of themselves to serve Christ. They have a new firsthand perspective on hunger and its rampant occurrence locally, nationally and internationally.”

It’s the sixth year that Crestfield has hosted the 30-Hour Famine activities. The weekend of Feb. 27-28 was the more popular of the two, with about 110 students and nine churches represented. Those two days are a designated national weekend for the 30-Hour Famine by World Vision. A second national one is scheduled for April 24-25, but Crestfield is not participating in the April date.

The youth ended their famine at Crestfield by participating in communion on Saturday evening. 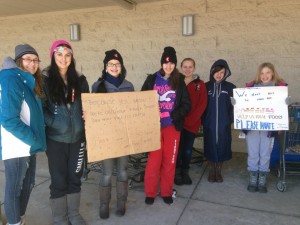 Youth at the Crestfield camp from Sunset Hills United Presbyterian Church not only participated in the 30-hour famine, but they also went into the community in search of food.

“I felt breaking the fast with communion was much more meaningful than a regular meal,” an unnamed church group leader wrote on a post-retreat evaluation survey.

Another commented that “Every time they are forced out of their comfort zones while serving others I think they are reminded that mission is about others, not them. I constantly try to push them past their ‘norm.’”

A third person wrote, “We live in a bubble. For the majority of our teens, until the Famine, they don’t have any clue about being hungry.”

One of the youth groups that participated in the 30-Hour Famine at Crestfield in late February was Sunset Hills United Presbyterian Church in Mount Lebanon. The youth group, which included 10 students and three chaperones, has been involved in the event all six years Crestfield has hosted it. On Friday, they took part in “Tribe Games,” which helped the youth understand the difficulties other kids face trying to get food in other parts of the world. One game had the youth form a circle, with one student blindfolded in the middle looking for bananas.

“They relate them back to what other kids would be feeling or what other countries are dealing with,” explained Laura Smith, the director of Christian Education at Sunset Hills United PC. “It really taught them how other countries really have to work hard for their food. It’s not just given to them.” 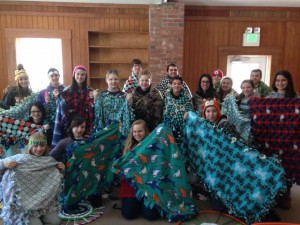 Some of the youth at Crestfield made blankets that were given to a local pregnancy resource center.

The next day the youth from Sunset Hills United PC made 20 blankets that were given to a pregnancy resource center in Pittsburgh’s South Hills area and also stood outside a grocery store asking for food. Other groups did things like baking cookies and delivering them to the local police stations and fire companies, while others went door-to-door asking for food.

“The goal is to go back to your church and your community and raise money,” Laura added. “Our church, instead of raising money for the 30-Hour Famine, decided to sponsor a child through World Vision. So we as a youth group sponsored a child from Malawi.”

Last year, Sunset Hills United PC sold T-shirts for $10 that read “I bought this shirt to feed a child for a week.” The congregation has been supporting the same Malawian child for three years, with the 30-Hour Famine as the backdrop to the outreach. Those two ventures have helped bring world hunger into perspective for many of the youth.

“They learned how grateful they should be that they have food on their plate every night and access to it every minute of the day,” Laura said, reflecting on the weekend at Crestfield. “I think it made them more aware of other countries and what they’re dealing with. Their eyes were opened to what other people the same age as them are dealing with.”

One activity that really brought this into perspective was when the youth blew out a candle every 10 seconds to symbolize that a child dies of starvation 10 seconds every day. It was all part of an eye-opening weekend at Crestfield for over 100 youth who got a feel for what being hungry really is. It also impacted the chaperones as well. 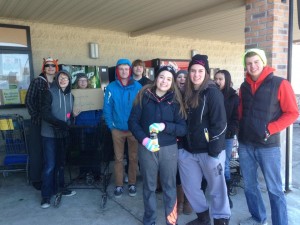 Cold and hungry youth stand outside in search of food to donate to local food banks.

“For me, (God) loves us all and he cares for us and he wants us to be serving him and to serve each other for him,” Laura said, reflecting on what the weekend meant to her. “We can do that in our own little comfort bubble here just by feeling the hunger and the pain in that 30 hours. It makes you want to do more and want to help serve.”

Many of these same activities were held at Hillside Presbyterian Church in Greenville, PA, during the last weekend in February. Hillside hosted 42 youth and another 14 chaperones from six congregations in what it called a “30-hour fast” because its activities were not directly related to those of World Vision. One difference was that the Hillside group opted to solely raise money for the cause, to the tune of $1,500, which was given to three organizations in the Greenville area that deal with hunger. It did not collect any food like is requested by World Vision because one of the organizations it supported only accepts monetary donations.

“One of the things that’s going on the Greenville area is 50 percent of our elementary schools students are on financially-reduced lunches,” said Charlie McErlane, the youth director at First Presbyterian Church in Greenville, who oversaw the weekend activities at Hillside. “That statistic in and of itself when it was presented by Christian Fitness Ministries really had an effect on people.”

One of the organizations the funds were donated to was Christian Fitness Ministries, which organizes a Backpack Program that gives these underprivileged students a backpack full of food to take home to their families during the weekends. A speaker from the Backpack Program spoke to the youth at the 30-hour fast, and it seemed to make a difference.

“Some of the youth were participating in a program with the school called High School Helpers,” Charlie said. “They go into the elementary schools and work with the younger kids on a one-on- one basis one or two times a week, and they’ve seen these backpacks and often wondered what they were. And now they know what they are and they understand that this isn’t necessarily a problem in other places in the world. This is a problem in our community where we put a head on the pillow each night.”

The other two organizations that received money through the 30-hour fast were the Salvation Army and the Good Shepherd Center. The Good Shepherd Center is a multi-denominational ministry that “shows concern for all individuals who enter our doors regardless of creed, race, nationality or lifestyle.” It includes a food pantry that annually reaches 300 families in the Greenville area. The Good Shepherd Center was not aware of the fundraising efforts until it received the check, a low-key donation that was planned so as not to draw attention to the youth but instead keep the focus on the work at the center.

Another activity at Hillside were breakout sessions that were centered on four hunger themes – spiritual, physical, mental and emotional. It all helped hammer home that hunger is a very real problem, not only in far-away places of the world but also next door in the hometowns of congregations throughout the United States. Going without food for 30 hours gave these youth a taste of what that’s like, and it will undoubtedly have an effect on them for years to come.