The people who became the Presbyterians of Huntingdon Presbytery were Scots-Irish, who moved westward from the Cumberland Valley seeking land. By 1750, the most intrepid and independent of the Scots Irish were pushing their way into the northern part of Fulton County and infilling the upper Juniata Valleys. 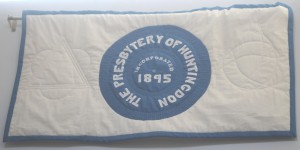 To pacify the resident tribes of the Six Nations, understandably miffed at the continuation of infringement of their treaty rights, the British magistrates evicted the settlers in the Juniata Valley and burned their cabins, forcing many of them to move further westward. So the Calvinist Junkins and Galloways of our Burnt Cabins, PA, went on to become the founders of Presbyterianism around Lexington, KY, and Cincinnati, OH, while the story of continuing Presbyterianism in this part of central Pennsylvania begins with a lonely, but committed, candidate for the Gospel Ministry named Philip Fithian.

In 1775, the organized presbytery overseeing everything west to the Pacific Ocean was Donegal.  This presbytery sent young Philip on a missionary tour through Lewistown, Seven Mountains and into Huntingdon Borough. There he found a great deal of liquor but no organized congregations. Disappointed, he returned to Philadelphia where he died two years later.

Meanwhile, the Scots-Irish continued to emigrate to these fertile valleys and began to gather for worship. By the time when Donegal set off its western edge as Carlisle Presbytery in 1786, worshiping communities had formed at Tuscarora (Mifflintown), West Kish (Belleville), McVeytown (then Wayne), East Kish (Reedsville), Lewistown and Bedford.

Despite the departure of the Covenanters in the 1750s, their numbers had also replenished, and early Associate Reformed and Associate congregations formed at Cove in Fulton County, Kishacoquillas and McAlevy’s Fort. The first pastors to be installed in this area were Samuel Dougall on Nov. 10, 1775 at Upper Tuscarora, William Logan at McAlevy’s Fort Associate on April 10, 1777, and James Johnston at East and West Kish on Aug. 19, 1784.

Their numbers continued to swell by both new congregations and new pastors. The 1794 General Assembly appointed commissioners to assemble the following April in Penn’s Valley and erect a presbytery named Huntingdon, which would fit between Carlisle on the east and Redstone on the west, encompassing Juniata, Mifflin, Huntingdon, Blair, Centre, Clinton, Lycoming, Northumberland, Snyder, Union, Columbia, Clearfield, Montour and parts of Perry and Cambria.

Within those bounds were only 11 ministers, albeit 13 congregations, in the area that remained Huntingdon when it split again 11 years later, with the northern half being set off as Northumberland Presbytery. With the exceptions of Bedford (joined Huntingdon in the 1850s) and DuBois (returned with the merger of 1959), the PCUSA boundaries were set until the 1970s moved the Juniata County congregations back to Carlisle.

The Old School-New School dispute left the presbytery untouched, except for two tiny New School congregations at Spring Mills and Hublersburg in the north end of Penns Valley. The United Presbyterian congregations in this area were split among three presbyteries: Big Spring, Conemaugh and Brookville, but their affiliations remained steady. Nor did slavery, Sabbath observance, use of musical instruments or control of missionary societies ruffle the waters of this presbytery in the mid 19th century.

What did engage the enthusiasm of the presbytery was education. In rural Shade Gap, James Y. McGinnes opened the Milnwood Academy in the fall of 1848 with two students. By the end of term, there were 22, and over the years the numbers grew to 80 students. The most impressive institution was the Tuscarora Academy, which was dedicated to providing the preparatory background necessary for students to enter Princeton Seminary. Nineteen of this presbytery’s pastors alone came through its ranks. It operated from the 1830s well into the last decades of the 19th century. Revs. William Styles Garthwaite, Joseph Milliken Goheen and John Alexander McGinley were among the clergy who taught there.

Another well-known institution in these parts was the Bellefonte Academy. Although it had been established earlier, it was limping along, when the trustees hired Rev. James Potter Hughes to take it in hand in the fall of 1868. Hughes restored its languages, elevated its math and took a fatherly interest in his students until his death in 1920.

Although the presbytery quietly did its part to prepare the next generation of ruling and teaching elders, its most prominent member was a ruling elder from the Huntingdon Presbyterian Church, whose name became synonymous with mission, Robert Elliott Speer. Graduating from Princeton University in 1889, Speer was elected Secretary of the PCUSA Board of Foreign Missions in 1891, a position he held for 46 years. The presbytery heeded his calls to evangelism, sending Noah McDonald; Agnes, James and John Orbison; Edmund McDowell; Fredrick McKenrick and Donald McIlvride to all points of the globe, and most recently Sharon Babe to Haiti.

Around the turn of the 20th century, this presbytery entered into industrial mission work, hiring evangelists who spoke eastern European languages and folks who could work in the mining and lumbering camps. They established congregations at Robertsdale, Madera, DuBois, Winburne Hungarian, along with Burnham and Altoona Third. The UPNA also organized urban congregations at Lewistown, DuBois and First and Second Altoona.

Still, the heart of this presbytery has remained rural and small town. It remains generous and outward looking, maintaining a partnership with the Church of Christ in Thailand, sending mission teams to Haiti and India and to aid recovery after Hurricanes Katrina and Sandy. In 2017, there were 45 congregations and 4,726 members in the presbytery.