History: Synod of the Trinity – 300 years of dedication to the region

A lot has happened in the past 300 years. The United States of American was founded. A man walked on the moon. A terrorist strike on Sept. 11, 2001, changed the world. And through it all, Presbyterians have been there every step of the way. They were signers of the Declaration of Independence (12 total), an astronaut on Apollo 11 (Buzz Aldrin) and experienced loss when the country was attacked. 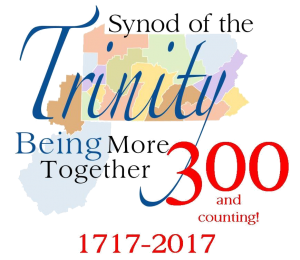 The history of the Presbyterian Church got its start in Philadelphia where the first presbytery and synod were formed. The first presbytery was organized in 1705 and met for the first time a year later. According to the “Historical Sketch of the Synod of Philadelphia,” a presbytery meeting including seven ministers from Pennsylvania, New Jersey, Maryland and Delaware was held on Oct. 27, 1706 but the minutes from that meeting where Francis Makemie was presbytery moderator have been lost. Called the General Presbytery, it quickly grew in size, and on Sept. 21, 1716, it decided to break into four presbyteries and create a General Synod (eventually known as the Synod of Philadelphia). Consisting of 17 ministers and a territory from Long Island to Virginia, the first synod met for the initial time on Sept. 17, 1717 in Philadelphia, and consisted of presbyteries from Philadelphia, New Castle, Snow Hill and Long Island. However, the Presbytery of Snow Hill was never formed, and those churches were absorbed by New Castle.

Meanwhile, the Synods of Pennsylvania and Philadelphia shared some of the same boundaries, “but the latter body grew to be unwieldy, and was materially changed,” as it reads in the “Historical Sketch of the Synod of Philadelphia.” Eventually a split occurred in Philadelphia and in 1854 the Synod of Baltimore was formed, which included many presbyteries from the Synod of Philadelphia. In 1870, a reunion of the old school and new school sides met and new synod boundaries were established. Four synods in Pennsylvania were created (Philadelphia, Harrisburg, Erie and Pittsburgh), while the Synod of Baltimore included churches in West Virginia, and four synods in Ohio (Cleveland, Toledo, Cincinnati and Columbus) comprised that state. (At this meeting, there were 34 synods created, stretching as far as the Synod of the Pacific – a region west of the Rocky Mountains.)

In 1882, the Synod of Pennsylvania was formed from the four synods that had encompassed the state, and the synod’s geographical boundaries remained constant for a lengthy period of time. In 1973, the General Assembly created “regional” synods, and the Synods of Pennsylvania and West Virginia were merged to become the Synod of Pennsylvania-West Virginia (which also included a small portion of eastern Ohio). The name Synod of the Trinity was later chosen to replace the unwieldy geographic title. The current boundaries were established after the reunion of northern and southern Presbyterians in 1983, when the Presbytery of Greenbrier – formerly part of the southern church – was united with the Presbytery of West Virginia and became part of the Synod of the Trinity.

The Synod today covers all of Pennsylvania, all of West Virginia except for the eastern panhandle and the counties of eastern Ohio (with West Virginia’s northern panhandle) generally known as the Upper Ohio Valley.