In 1971, the General Assembly of the United Presbyterian Church approved a Design for Mission that called for a sweeping reorganization of the church, which included new presbytery and synod lines. These new lines were to recognize the integrity of metropolitan areas, and demographic and sociological as well as political factors. 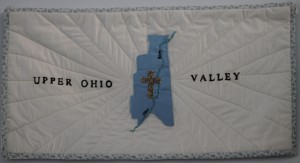 For many years, Presbyterians on both sides of the upper Ohio River had recognized it made little sense that metropolitan areas such as Wheeling/Martins Ferry, Steubenville/Weirton and East Liverpool/Chester were divided not only by a presbytery but also by a synod line. When it became evident that many presbytery lines would be changed, discussions began about forming a presbytery that would include both sides of the river. It was no small task; it involved three synods (Ohio, West Virginia and Pennsylvania) and four presbyteries (Muskingum, Steubenville, Wheeling and Parkersburg).

However, by the grace of God, this writer called the first meeting of the Upper Ohio Valley Presbytery to order on Jan. 3, 1973, at the First Presbyterian Church in Martins Ferry. Interestingly, the most difficult issue faced was in which synod (now Trinity or Covenant) the presbytery would be included. The compromise was for the presbytery initially to be a part of the Synod of the Trinity and after a year to vote on where to ask the General Assembly to be placed permanently.

When the Presbyterians came together that day in Martins Ferry they brought with them 175 years of history in this area. That history involved at least four denominations, several synods and numerous presbyteries. It is obvious that including that history is not within the scope of this writing. Although it may be worth noting that when the new presbytery was called to order that Steubenville Presbytery was among those that ceased to exist, and it was the second oldest continually existing presbytery west of the Alleghenies.

Rather than a history of those years prior to 1973, the author would like to include several flashbacks to people or incidents that describe interesting or poignant events and people.

John Brice held the first Presbyterian worship service in this area on horseback (and with armed guards to prevent an Indian attack) at the forks of Wheeling Creek (Stone church) in 1787. In 1790, worship was held at Holiday’s Cove (Weir Cove), and in 1793, at the Flats (New Manchester). As the century drew to a close, the danger of Indian attack was largely eliminated and people began to flood into both sides of the Ohio valley.

Across the river in Ohio, 1798 worship was held at Indian Wheeling Creek (St. Clairsville) and Short Creek (Mount Pleasant). (These two churches were the third and fourth Presbyterian churches founded in Ohio.) In 1800, the Presbyterian Church spread to Steubenville, Island Creek (Hill Top), and East Liverpool (Longs Run). By 1803, Beech Spring (Harrison County) and Crabtree (Belmont County) had been added to the list. The Presbyterians were now firmly established in the Upper Ohio Valley.

When Beech Spring was organized in 1803, it called newly-ordained John Rae to the pulpit where he remained for 50 years. There was never even a crossroads at Beech Spring, but under his leadership Beech Spring became, if not the largest Presbyterian Church in the state, one of the largest. At the same time it founded churches in Hopedale, Smithfield, Bloomingdale, Cadiz and elsewhere.

In Steubenville, the Rev. Charles C. Beatty became the pastor. (His grandfather and namesake had conducted what may have been the first Christian worship in the Northwest Territory in Newcomerstown in 1766.) A man of remarkable energy, he also ran several businesses, and at the end of each year gave all that he had above $2,000 to the church. He and his wife established the Steubenville Women’s Seminary, which was the first advanced educational institution for women in the Northwest Territory.

HIGHER EDUCATION AND THE ANTISLAVERY MOVEMENT

In 1818, the Rev. John Walker, a young Presbyterian minister, founded Franklin College in New Athens. John Walker was also an avid abolitionist, and he had many followers in this area. At one time the controversy that movement caused led to competing colleges in New Athens. This weakened the college but it continued to exist until 1919 when it merged with Muskingum College.

How deeply slavery divided the people of this area in the 1840s is shown in the following story. In the Beech Spring cemetery, there is a grave marker which reads, “David Taggart, Theological Student, He died of a broken heart.” David Taggart grew up in the Beech Spring church and always wanted to be a minister. He went off to Franklin College where he became convinced that slavery was wrong.

He went to Western Theological Seminary in Pittsburgh and came back home to be licensed to preach. The presbytery asked him if he would refrain from speaking about slavery in his pulpit and he would only reply that he would preach what God and his conscience dictated. They sent him away to come back in six months. The same thing happened six months later and he was refused ordination with his own lifelong pastor, John Rae, voting against him. He died a few months later, his family said of a broken heart.

The Civil War touched the presbytery when Confederate General John Morgan led his raiders across Ohio (the northernmost advance of the Confederacy) and directly across the presbytery. He surrendered almost on the steps of the Weaver Beaver United Presbyterian church, which was until it closed recently the northern most church in the presbytery.

At that first meeting of the presbytery in 1973, Niles Southwick, host pastor, conducted the worship, and Paulus Keppel, beloved elder and lay preacher from Calvary church in St. Clairsville, was elected moderator. Richard Eshler, pastor at Barnesville, was elected Stated Clerk and Richard Baker, National Mission Consultant for Steubenville Presbytery, was chosen interim presbytery executive. It should be noted that a year later the presbytery overwhelmingly voted to remain a part of the Synod of the Trinity, and Richard Baker was chosen as the permanent presbytery executive, a position he held until 1992.

Donna M. Todd was selected as secretary and later office manager, a position she held until she retired in 1999. She also became journal clerk for the presbytery and served in that capacity for 41 years.

In 1976, the presbytery office was located in Vance Memorial Presbyterian Church in Wheeling where it remains today. In the early years of the presbytery, the staff was enlarged when the Rev. Wilson Bradburn was named Minister At-Large. He served as interim pastor in churches with special needs, did pulpit supply and assisted with the work of the Ministry Committee. The Rev. Frank Lewis became a part-time Pastor to Clergy Families. Later, the Rev. Mary Jane Knapp succeeded the Rev. Bradburn.

In 2001, Patty Oleska became office manager, a position she still holds. In 2002, the Rev. Thomas Armstrong joined the staff as Ministry Consultant and Stated Clerk and remained until he and Dr. Browder retired in 2012. The Rev. Dr. Franklin Lewis was then chosen Stated Clerk, a position he still holds today.

For an extended period of time, the presbytery published a paper it called “The Connector” under the guidance of elder Milton Ronsheim, a Cadiz editor/publisher.

Beginning late in the 20th century, the years were not kind to the Upper Ohio Valley due to the almost total collapse of the steel industry and other manufacturing. When Dr. Browder and the Rev. Armstrong retired in 2012, it was evident that the presbytery could no longer afford a paid professional staff and a new approach would have to be found.

A Reformation Team was formed to create a structure that fit the new circumstances. Using greater volunteer support and stronger connections between churches, a new way of being the presbytery was created. It is now led by an Administrative Team with two divisions, the Shepherding Team and the Pastoral Team. This new way of being a presbytery is generally judged a huge success.

(The author wishes to express his appreciation to Patty Oleska who provided much of the information in this writing.)