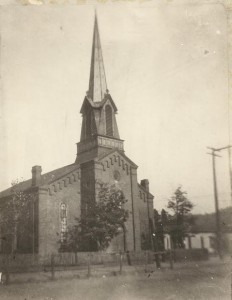 Around 1838, Moses Porter, a resident of Martinsville (later Martins Ferry), had a Sunday School in his home. Moses and his wife were members of First Presbyterian Church in Wheeling, WV. The young Sunday School movement was an outreach to unchurched children. This Sunday School was a part of his mission to the community in which he lived.

In a familiar process in that era, families were sent from a healthy, existing congregation to become the seed for a new congregation. Ten members of the Mount Pleasant Presbyterian Church were among the 16 organizers. Two were from First Presbyterian Church in Wheeling, and one from the St. Clairsville Church. In addition two came from Fourth Church in Cincinnati and three from Connier Synod of Ulster, Ireland.

Those 16 members were the charter members on March 31, 1841 and had a tremendous commitment to the Gospel message in Martinsville. That congregation grew to build a building on a wheat field donated by Ebenezer Martin. It was constructed at the cost of $2,000. The congregation met in those early years without a piano, and without an organ. A leader would line out the songs.

In 1898, a new church facility was constructed in Gothic style to meet the need of a growing church in a growing city of Martins Ferry. The location was central in the business area of the community. Additions to that facility provided more Sunday School space. In 1955, a major Sunday School addition was added. In 1986, major renovations occurred to the building. From pianos to pipe organs to electric organs to keyboards, the music styles have changed through the years.

As the 20th minister to serve the congregation, the Rev. David Stammerjohn was called to First Presbyterian Church in 2010. The ministry and mission of First Presbyterian Church has taken new forms in this changing community. The steel mills are gone and the industrial base of the Ohio Valley has changed. The church continues to lead the community in the formation and operation of the Daily Bread Center, a collaboration of 11 churches to provide a community food pantry. At its church garden, members raise food for the pantry.

The church has a visible presence at the community fair, the soap box derby and other events. Its youth mission, under the direction of Jennifer Banks Vickers, is an outreach to at-risk youth, most of whom have no church background. Like that early Sunday School, the church continues to reach the community around it.