By Nathaniel Roe and Mike Givler 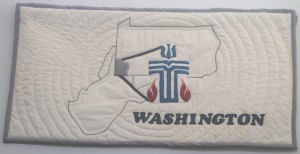 Nine ministers were part of the Washington Presbytery when it was formed and met for the first time on Oct. 19, 1819. All told, this new region covered more than 6,000 square miles and included 19 congregations. Washington eventually moved out of the Synod of Pittsburgh and into the new Synod of Wheeling in 1841. It returned to the Synod of Pittsburgh in 1870, but 12 years later General Assembly reconstructed all synods so they would conform with state lines, thus putting Washington into the Synod of Pennsylvania. Washington had extended into West Virginia until 1863 when the General Assembly ordered that the southern boundary of the presbytery extend only to the Pennsylvania border. This pushed four churches into the Presbytery of West Virginia.

In 1903, Cumberland Presbyterian Church merged with Washington Presbyterian Church, bringing many churches into Washington Presbytery in Greene County and along the Monongahela River. Washington Presbytery was a very local-mission-oriented presbytery with the Board of National Missions, especially in the 1950s and 1960s. There were many special ethnic background churches and chapels ministering to miners and specialty workers, including Langloth (Spanish), Greensboro (Polish), Daisytown and Westland (Hungarian), Donora (Scottish), McDonald (French, Belgium – Iron Memorial Church), Muse (Waldensian), Canonsburg (Greek, Italian, Syrian – Lebanese) and Slovan (Yugoslavian, Slovenian).

Currently, the Washington Presbytery is a network of nearly 50 Presbyterian churches in Washington and Greene counties in the southwestern corner of Pennsylvania. For the past 20-plus years, the presbytery has developed a relationship with the South West Bethel Synod of Ethiopia through the exchange of letters, prayers and visits. Every fall, the presbytery engages in a pumpkin sale with its churches, and the proceeds completely support a Literacy Project in Ethiopia.

With a nod to its original history, the presbyteries of Washington and Redstone currently share the oversight and administration of the ministry of Pine Springs Camp. Washington is also involved with the Presbyterian SeniorCare Washington Campus, which is a long-standing history of ministry with the aging population of western Pennsylvania. In cooperation between the presbytery and area Presbyterian churches, choirs and other congregational groups provide worship leadership, companionship, visitation and other volunteer ministries on campus.