Paris is not a short drive to New Jersey. Neither is Mars for that matter. And Paris and Mars look nothing like Brigantine, N.J., but these days the resemblance is a little closer thanks to the work that was done by several congregations from these western Pennsylvania communities during the summer of 2014. 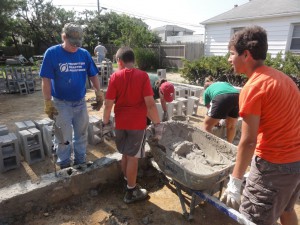 Old Union Presbyterian Church in Mars and some partnering congregations spent a week in early August doing their best to repair homes that were destroyed by Hurricane Sandy nearly two years prior. Specifically, two houses were worked on, and even though they weren’t completely restored, a significant amount of work was finished on the structures that greatly moved the displaced owners closer to returning to their properties.

With the Atlantic Ocean as a backdrop, the group reflected on God’s word during evening gatherings after spending the day trying to reconstruct homes that had been washed away by the powerful flooding of Hurricane Sandy in October of 2012. All told, there were 15 people in the group from eight congregations, with Old Union PC (Mars, PA) and Paris PC (Burgettstown, PA) having the largest representation.

One part of the mission team, which also included two women from Mechanicsburg, turned its attention to a home that was in need of electrical, plumbing and flooring repairs plus painting. The group had the pleasure of meeting the owner, Deloris, who had lost her husband several years before. As Jeff Trump of Paris PC appropriately wrote in his daily blog, she was “displaced and disheartened to say the least.” 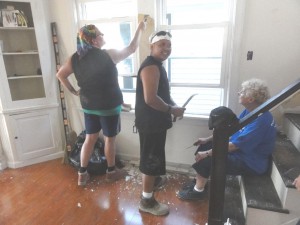 The house on the other job site wasn’t as far along. It only had a skeleton foundation of blocks and had to be totally rebuilt. Again, the team was fortunate enough to meet the owner of this home, Russ, during its stay. She had been living in a hotel for 18 months and was told she could no longer live there. Plenty of work was completed on this property, but there was still a long way to go before Russ will be able to be back under her own roof.

Away from the work sites, the group from the Pittsburgh area teamed up with a mission party from Crafton Heights (Pittsburgh neighborhood) to provide meals in the host church for the Brigantine community. The team was helped in its mission work by a $1,000 Peacemaking Grant it received from the Synod of the Trinity.

All in all, it was a successful week of work and fellowship. As Trump wrote, “People on the mission trip really want to complete the tasks that we are performing and do it to the best of our abilities. We really do want these folks back in their own homes again as soon as possible. With the help of God and in His timing, this will be done!”