Northern Ireland and the Isle of Iona are separated by only 145 miles, as the crow flies. Yet to travel between the two is a journey of about 330 miles and involves going via the mainland of Scotland and two ferry rides. For the Rev. Dr. Rosie Magee, such a circuitous route is familiar. She’s taken over 25 years to go from her hometown to her neighboring country by way of several years of overseas development work and a lengthy stop in the United States. Yet that time has helped shape her for what lies ahead.

Magee, a PC(USA) pastor, has been the chaplain of Wilson College in Chambersburg, PA, for more than five years. Wilson College is a small, liberal-arts college affiliated with the PC(USA). In the middle of February, the Northern Ireland native will embark on a new ministry with the Iona Community. The Iona Community is located off the west coast of Scotland in the inner Hebrides. Founded in 1938, it is a global Christian ecumenical community working for peace and social justice, rebuilding of community and the renewal of worship.

The Iona Community is headquartered in Glasgow with resource centers on the island of Iona. There are residential full-time staff as well as volunteers and housing for the close to 90 guests per week who come to Iona between March and November.

She’ll be the Island Centres Director, which entails providing strategic leadership and management for the two residential centres and ensuring services in the Abbey Church reflect the values and vision of the Iona Community. Magee will oversee the hospitality, finances, volunteering and programming that occurs at the Abbey and Macleod Centres while also coordinating with the main office in Glasgow. Magee was invited to apply for the position and was offered the job in December. To say God was at work during this time would be an understatement.

“God’s role in this is primary, and I’m thankful for that,” said Magee, who has been an associate member of the Iona Community since 2009. “My pattern in recognizing God’s leading is that I’m usually the last to know. Likewise, with this position. It was other people who, through my interactions at Iona, thought of me when this job became open. They saw something in me that perhaps I wouldn’t have even thought of for myself. They thought I would be a good fit.”

Magee originally relocated to Ithaca, N.Y., in 1999. After spending three years in New York, she moved to central Pennsylvania and in 2005 began studying at the Lancaster Theological Seminary. She was auditing classes there and had no intention of becoming an ordained pastor since she “was raised in a religious tradition which does not recognize female ordination,” Magee said. “I was slow in catching on that this might actually be God’s will.

“I was between work permits and began taking classes at Lancaster Theological Seminary,” she continued. “Then the director of admission approached me about being a full-time student. I did not start out on the ordination track but about a year later I switched to the M.Div course. I had wonderful support and mentorship in terms of leading me towards the realization that God’s call was to go into ordained ministry.”

After graduating from Lancaster Seminary in 2008, Magee began full-time ministry at Wilson College as the school’s chaplain in 2009.

“It became clear in the fall of 2014 that my time in the United States was probably drawing to a close from a visa perspective, so getting this email was as timely as it was unexpected and certainly gave me pause for thought,” Magee said.

That opening was for the Island Centres Director. 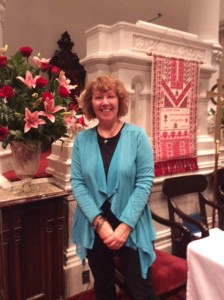 “The Iona Centres are not billed as retreat centers. They are actually places of engagement and living in community,” said Magee. “We work together and worship and learn together. People from all over the world come to Iona to experience the vision of the Iona Community and take it back to their home communities.

“It’s about that experience of being in community and the rhythm of community life and a common focus. … While of course there’s a spiritual individual journey going on for each guest, there’s just as much emphasis placed on the communal journey.”

While she’s looking forward to her new opportunity, Magee’s leaving behind a place and a country that has helped her get to where she is now.

“I love being at Wilson,” she said. “I love being the chaplain here; it is a fabulous community. I have a whole mixture of emotions, but I do sense God’s call in this move, the same way I sensed God’s call in coming to Wilson. From that perspective, my main task is to be faithful in following that call. I’m excited, there’s some trepidation in there, too, but the overall sense is one of anticipation for what lies ahead.”

Magee was ordained at the Second Presbyterian Church of Carlisle before being installed at Wilson College. She has served on the Committee on Ministry in the Presbytery of Carlisle for the past three years.

“I have been very blessed and consider myself very much a child of this presbytery,” she said. “Obviously I wasn’t born and brought up here, but I came under care in this presbytery and was ordained and installed here within its bounds. I do not have standing within the Church of Scotland at this time, it’s just so wonderful that I am going to be able to be a member-at-large, a member-at-very-large I guess, of the Presbytery of Carlisle.

“I am very grateful to the presbytery for their support over the years. I’ve also had financial support from the Synod of the Trinity recently as I studied for my D.Min. This is one of the joys of being in a tradition which places such an emphasis on relationships and connectionalism.”