Synod SDOP coming to rescue of WEEE, others

Alice Williams is no stranger to “downsizing.” She has been laid off three times during her career and knows the road back to gaining employment can be a tough one. So Williams, as much as anyone, can appreciate the opportunity to land back on one’s feet and get going again. 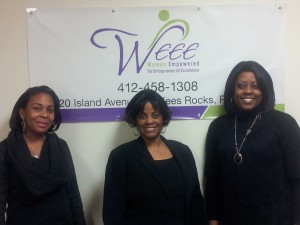 Part of the founding group for Women Empowered for Entrepreneurial Excellence includes, from left, Shaunte Steif, Alice Williams and Troi Simpson. Simpson also sits on the board of the Pittsburgh Presbytery SDOP and is the secretary of the WEEE Board of Directors.

Williams is the founder and executive director for Women Empowered for Entrepreneurial Excellence in McKees Rocks, PA, near Pittsburgh. It’s a consulting organization designed to help women-owned businesses gain economic stability by providing things like an “incubator” program, which gives businesses a shared space where they can work, bring in clients and even train.

Henk Bossers, the chairman of the Synod of the Trinity’s Self-Development of People committee that helped fund the project, described the incubation program as one where an “umbrella group of people helps smaller groups or individuals start a business because it’s too hard to start it all by yourself and do it all by yourself. They are helping individuals start their businesses and they provide classes, oversight and training so that small business groups can start working again. It has become a formal training program to help individuals go.”

It’s a unique concept in which WEEE received in excess of $108,000 from the Synod’s SDOP group during a three-year span. The money was handed down from the Presbyterian Church (U.S.A.) through funds it received thanks to the “One Great Hour of Sharing” offerings. Trinity’s SDOP committee has handed out over $600,000 to worthy organizations in just the last 10 years and as much as $75,000 in a given year.

“The SDOP has allowed me, Alice Williams, personally to prove that people have in them a desire to be self-sustainable,” Williams said. “SDOP supported my dream, my vision of working with marginalized people and showing them how to become self-sufficient. SDOP also helped our group realize that there was somebody out there who believed that we could do this for ourselves – with our own ingenuity.

“God has sustained me. I cannot say that I have not grown, but I have certainly been sustained, also. I have watched the hand of God in this process with WEEE where money has come out of giving from the church. I used to say, ‘Church doesn’t give you anything,’ and God changed that. These are donations, offerings coming out of other people’s pockets.”

After Williams lost a “lucrative” business, she was determined to find somewhere that she could help women become self-sustainable business owners. Williams found a job with the YWCA in an entrepreneurship program that allowed women learn about business ownership. However, the program provided no financial means or support for business growth and sustainability. She was frustrated by the fact that the women business owners couldn’t stay on their feet.

“I never saw the businesses grow into any kind of sustainable business, something that someone could use to grow, support their families and really become self-sufficient in that process,” Williams lamented.

Williams continued to try to find a way to help. After the YWCA program was eliminated, Williams took those same women and created WEEE in 2009. She and her staff have been organizing opportunities to aid women business owners in their pursuit of self-sustainability ever since.

“I saw a way that the women that I worked with could get some real dollars to leverage starting a business with the support that I could offer and I could help them learn how to do things for themselves,” Williams said, remembering the early stages of WEEE, which first met in her living room.

Many of the businesses WEEE was involved with were identified as being in poverty, not having good credit and having poor financial behavior. Trying to find ways to pay these start-up companies’ bills became a necessity, so WEEE partnered with 2Kings4 Consultants. By using a housing audit that helps organize food and lower utility bills, 2Kings4 helped find money in business owners’ houses to enable them to have funds to put back into their businesses. 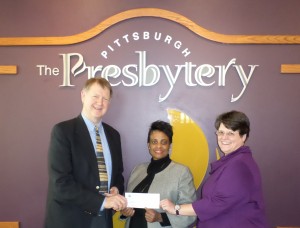 “We’ve become a group that pays attention to how we live and how we spend money, and consequently some of the women have started viable businesses,” Williams added. “The same frugal mindset needed to manage a household apply to managing a small business.”

Bankston Cleaning Services is one of the success stories WEEE can be credited for helping to jumpstart. The owner was laid off from her job but on the side had been cleaning residential and commercial properties. Hoping to start a new career in cleaning, Mary Alice Bankston came to WEEE looking for non-monetary assistance. Thanks to that guidance, Bankston is at the top of a $150,000-a-year business as a government-certified Minority, Women and Disadvantage Business Enterprise and receiving government contracts.

While WEEE is currently helping minorities and those who are poverty-stricken, another avenue could also be opening up for it.

“We anticipate that WEEE is going to be looked at by the prison industry,” she said. “People who cannot easily go out and get good-paying jobs but certainly have entrepreneurial skillsets and could start viable businesses.”

The Synod of the Trinity’s SDOP committee actually turned down WEEE’s funding request on two different occasions before the application finally went through in 2012. That persistence is just one of the qualities that eventually helped WEEE get its money.

Holy Smokes Café in Tarentum, PA, near Pittsburgh was also recently the beneficiary of some SDOP grant money. Holy Smokes Café was designed to give people an alternative to a sports bar, instead creating a Christian bar that consisted of a restaurant setting where the atmosphere was faith-based. Open on Sunday afternoons, the café had a menu with no prices, asking the patrons to pay what they felt the meal was worth. If someone couldn’t pay, they were still allowed to eat because of the belief that no one should go away hungry. A total of over $90,000 in SDOP money helped the café get up and running, leading to a nearly six-year existence. 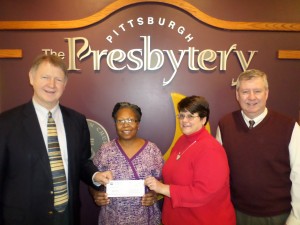 Having money to distribute has not been a problem for SDOP. Having committee members is, however. As of early February, the committee did not have a majority of minority members on its committee, thus making it unofficial and unauthorized to carry out the duties to which it has been assigned.

“The original intent is it’s supposed to be anti-discrimination, or helping the African-American community get on their feet after a long history of racial prejudice,” Bossers explained. “It meant to create new and improved opportunities to repair past injustices and injuries dealt by the Presbyterian church.”

SDOP was started in 1970, a year after the Black Manifesto was presented at annual conferences of many denominations around the country. At the 1969 United Presbyterian Church (U.S.A.) General Assembly, a discussion centering on Hispanic injustices was linked in with the Black Manifesto, which called for $500 million in compensation for racial wrongdoing from churches and synagogues in the United States. From that a General Assembly committee was formed to look at racial issues within the PCUSA, and when the committee reported back to the GA in 1970, it decided to form SDOP.

The goal of SDOP is now designed to help all minorities in a unique way.

“The big-alarm criteria that’s being used by our committee is the very short warning ‘do-for,’” Bossers said. “We cannot be a committee who helps groups designed to help others. This is self-development. You have to help yourself. We get a lot of applications in which lots of wonderful people would love to help other people, but they’re not the beneficiaries. The criteria is so stringent that you have to go to another place to get the help to help others. … SDOP cannot do for others, you have to do for the group. And that’s a hard concept for people to get a hold of. Unless you help yourself, the SDOP project cannot fund your SDOP group project. For groups of people to help themselves remains challenging.”

Note: Anyone interested in learning more about the Self-Development of People or who are interested in joining the committee should contact Bossers by email at bossers77@gmail.com. For more on the Synod’s SDOP, click here.