There are a lot of things you can get conveniently at a drive-thru. Big Macs, banking services and prescriptions are just a few of them. Westminster Presbyterian Church has added to that list.

For 90 minutes on the morning of Ash Wednesday, the West Chester congregation offered drive-thru ashes – along with a free cup of coffee – to all of the passers-by willing to drive around the circle by the church’s front door, located just off well-traveled Route 202. From 7-8:30 a.m. on Feb. 18, all four of Westminster’s pastors were on hand to distribute the ashes and serve people who might otherwise not have the time or desire to participate in an Ash Wednesday service. 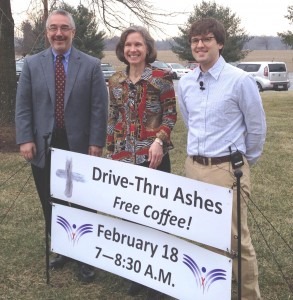 Getting set for their Ash Wednesday drive-thru service at Westminster Presbyterian Church are, from left, pastors Gary ArnTessoni, Ann Hatfield and Jon Frost.

“My guess is that there will be at least a few people who would not otherwise receive ashes – and may not have in a long time – who will be blessed by the opportunity to begin Lent this way,” the Rev. Don Lincoln said prior to Ash Wednesday. “That would be a very good thing and does take advantage of our unique setting on Route 202.”

Between 25-30 cars, many with multiple passengers, came through Westminster’s driveway circle on Ash Wednesday, resulting in nearly 40 people being imposed with ashes.

“Some Westminster members showed up who would otherwise not have been able to receive ashes,” Lincoln said. “Some folks from other congregations that didn’t have an Ash Wednesday service at a time that allowed for them to participate came and shared the beginning of Lent with us. Still others came who saw the signs or read the article and started their Lenten journey thanks to the efforts of Westminster that day. We even had some students from West Chester University show up.”

Detractors would argue that by offering a drive-thru church service it somehow lessons the experience. Lincoln disagrees.

“The imposition of ashes doesn’t/shouldn’t require a set service any more than the prayer of a chaplain over sailors headed to sea doesn’t require being seated in pews for an hour before receiving that prayer,” he said. “Scripture will proclaim ‘from dust you came,’ an invitation extended. The self-offering of one’s forehead or hand is a response to the Word, and there will be equipping for the journey – a cup of coffee and a brochure about the meaning of ashes and Lenten opportunities for worship. If people receive ashes who otherwise wouldn’t, I think that’s a goodthing.” 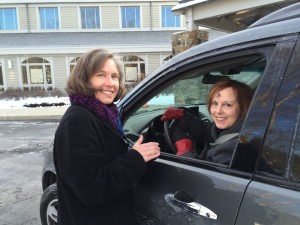 “I doubt very seriously that we’ll have people skip our usual Ash Wednesday morning or evening services because they can now get ‘quickie Ashes,’” he said.

(View a video from the drive-thru Ash Wednesday service here.)

Lent season lasts in the neighborhood of 40 days, going from Ash Wednesday to Easter Sunday, to simulate the time Jesus spent in the desert. According to Wikipedia, “Ash Wednesday derives its name from the practice of blessing ashes made from palm branches blessed on the previous year’s Palm Sunday and placing them on the heads of participants to the accompaniment of the words ‘Repent, and believe in the Gospel’ or ‘Remember that you are dust, and to dust you shall return.’”

Lincoln feels that by offering ashes conveniently through a drive-thru setting, he is just following along the same lines as Jesus in the Bible.

“It reminds us that ‘hospitality’ is at the heart of the Gospel,” he said. “Recall that Jesus took the Gospel to the streets, the hillsides, the thoroughfares, the town center, as opposed to always expecting people to have to come to the temple to hear of God.”

Westminster’s location makes it a perfect place to try something of the drive-thru variety. 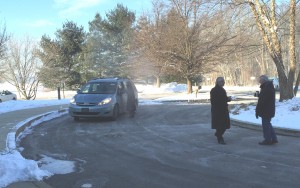 “Westminster isn’t an urban congregation,” Lincoln said. “We don’t do soup kitchens because that’s not our setting. But we are a ‘drive-by’ church. Thousands of people pass us every day. We have a visible location, are easily accessible and are a ‘light on the hill.’”

Lincoln came up with the idea for a drive-thru Ash Wednesday service after reading an article about a church in Nashville that offered the same worship style last year.

“Like us, they are a congregation situated on a major thoroughfare,” he said. “They reported more than 125 cars pulling over to the side of the road for ashes – including many with multiple occupants. In their particular setting, they estimated roughly 30 percent of those who stopped were Hispanic. One might surmise that perhaps some of the 125 cars that stopped contained folks with hourly employment and/or work schedule that would not allow them the privilege of making it to church at the times there were services.”

Lincoln continued that since reading that story he has heard about “Ashes to Go” ministries where congregations have taken ashes to the streets – like to subway, train and bus stations – to help with the beginning of Lenten season tradition for those who can’t make it to a church service that day.

“I have a nephew whose commute into New York City begins before 6 a.m. and ends after 7 p.m.,” he said. “What opportunities might he have to receive ashes if he wanted to?” 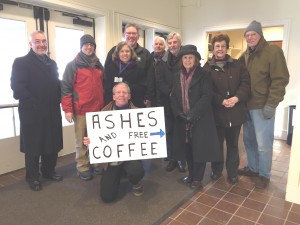 He added that the reason someone could come to Westminster for ashes could be varied.

“Perhaps someone whose day has gotten so scrambled that they have already determined they’ll just have to pass on going to an Ash Wednesday service,” Lincoln said. “Maybe someone who hasn’t been in a church in a long time – and is reluctant to just walk in an unknown church – but would appreciate the opportunity to engage in this Lenten ritual. Someone whose own church doesn’t offer ashes, and who might not seek them out in another congregation, but this provides the means of receiving ashes.”

Lincoln said the congregation plans to hold its drive-thru service again next year and might even add an evening commute time slot.