The Rev. Mark Englund-Krieger enjoys writing. He also enjoys research and history, so it’s not a stretch that the executive presbyter of the Presbytery of Carlisle just recently polished off his second book. “The Presbyterian Mission Enterprise: From Heathen to Partner,” which became available on Amazon.com in mid-February for $22.50, traces the history of mission work by the Presbyterian church by profiling a different mission leader (or two) in each of its 13 chapters.

With the foreword written by Hunter Farrell, the director of Presbyterian World Mission, the book was a labor of love that took nearly two years to complete, but it’s a subject that’s close to Englund-Krieger’s heart.

“The world mission conversation has been something we’ve been very involved with here (at the Presbytery of Carlisle),” he explained. “It’s been very important to me, and we have this partnership in Honduras that’s been a big piece of our ministry in the presbytery.” 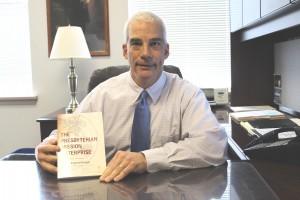 Prior to coming to the Presbytery of Carlisle, Englund-Krieger spent time in the Pittsburgh area where he became involved in the presbytery’s mission partnership in the African country of Malawi. He’s taken a trip there to help those in need and fondly remembers preaching in a Presbyterian church in Malawi that had 8,000 members.

Something that further piqued his interest came in 2012 during the General Assembly meeting in Pittsburgh where Presbyterian World Mission celebrated its 175th anniversary.

“I got to thinking about this and wondered ‘What happened 175 years ago?’” Englund-Krieger recalled. “So I started researching that and it really became the core chapter, the chapter on Ashbel Green, who was the driving force behind making that happen.”

As Englund-Krieger researched the history and went back even further than 175 years ago he found that many individuals were responsible for building and keeping the foundation strong for Presbyterian mission. People like the father-son duo of Walter and John Lowrie, William Carey, Clifton Kirkpatrick and Farrell are just some of the people highlighted in the book. Others include Robert Speer, who was the leader of the mission movement in the early 1900s, and John Coventry Smith, who helped start partnerships after World War II through a mission co-worker concept.

The most fascinating research Englund-Krieger did he’ll say centered on the early years of mission work in the late 1700s and early 1800s. He was surprised at how powerful the passion was to reach out and do mission work. A chapter on David Brainerd sheds light on how he reached out to Native Americans in Pennsylvania in the 1740s long before traditional missions were started.

“He caught tuberculosis and died working with the Indians, and he has become a model for sacrificial Christian service, especially in very evangelical churches,” said Englund-Krieger of the man for whom Camp Brainerd in Stroudsburg is named. “In evangelical churches today there’s this model of Christian sacrifice exemplified in David Brainerd, and many Presbyterians have never heard of him.” 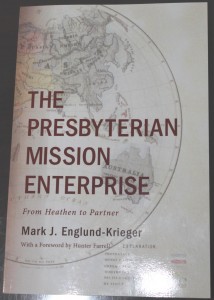 The majority of the research done for the book was obtained through the Internet archive system of the Princeton Theological Seminary. This enabled Englund-Krieger to do the research work from his desk instead of actually spending time traveling to libraries and historical societies to run down the information.

While Englund-Krieger is able to share his findings with the world through his book, he admits that the writing is really for his own benefit.

“The overarching goal is personal, it’s just my own kind of study, research, my own learning is really what it’s about,” he said. “But, as a contribution to the church, it’s this history, this legacy of world mission work that’s very important. It’s probably one of the most significant contributions that our church has made to Christianity, and I think some of those themes really guide us into the future. If we’re going to be able to revive and renew and refresh, it’s going to be in part because of the world mission efforts, I think. To become a global church, to become a church that’s really connected with what’s happening around the world in other churches, it’s vital.”

Englund-Krieger’s first book, which was published in 2010, was titled “Presbyterian Pendulum,” a rewrite of his PhD dissertation about the tracking of social justice ministry in the Presbyterian church in the 1900s. As for what’s next for him, his continued fascination with Colonial times and pastors of that era might lead him to a third book.

Englund-Krieger will admit he’s not out to make a living on his book writing. Instead it’s something he enjoys doing and feels the legacy of world mission work is crucially important to the future of the church.

“It’s just a personal joy,” he said. “I do think the World Mission effort is absolutely crucial. That’s the future. Unless we become truly a part of what I call Global Christianity and realize we’re just part of what’s happening in the world, we don’t have any future. If we turn in and become obsessed with ourselves, we might as well shut the door and turn off the lights. We have to live in this larger world.”

Note: Copies of Englund-Krieger’s book can be purchased on Amazon.com or through publishers Wipf & Stock Publishers by calling (541) 344-1528 or by email at orders@wipfandstock.com.