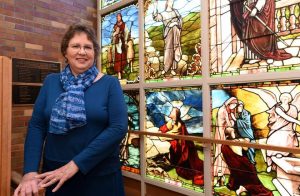 Rev. Anita Bernhardt, standing next to a picturesque stained glass window at Elmwood Presbyterian Church in Erie, PA, is looking forward to her time as the first woman to lead the Presbytery of Lake Erie.

Rev. Dr. James Bernhardt is a cradle Presbyterian. He has answered calls around the country within the Presbyterian Church his entire career. And every step of the way, his wife – the Rev. Anita Bernhardt – has found somewhere to land and carve a niche for herself, regardless of the denomination.

In 2021, Anita has found yet another new home. With her husband firmly planted as the senior pastor at Wayside Presbyterian Church in Erie, PA, Anita was answering a call at nearby Emmanuel Presbyterian Church as its temporary supply pastor when a call opened up that she couldn’t refuse. With the retirement of the Rev. Dr. David Oyler as its general presbyter last year, the Presbytery of Lake Erie was seeking someone to lead its region. Anita, with eight years of experience as an associate presbyter in the Presbytery of Western North Carolina, decided to throw her hat into the ring and was named the GP, starting in February.

“Part of why I have bounced around so much is because I just have not found a meaningful call that lasted as long as I wanted it to,” Anita said. “This one feels like a meaningful call. This presbytery is like many presbyteries in the country right now. It’s going through some transition and the future feels uncertain.”

Anita is the first woman to hold the position of general presbyter at the Presbytery of Lake Erie, something she isn’t taking lightly.

“The fact that the presbytery here is willing to have a woman lead them is a mark of their character,” she said. “One of the committee members said in the local newspaper ‘It’s about time’ because women have led the church for centuries.”

Raised in central Kentucky, Anita was ordained by the United Church of Christ and has been a part of six different denominations in one facet or another during her career. The congregations she has served, except for her most recent one in Erie, have all been UCC affiliated. Along the way, she has also answered calls with the Christian Church Disciples of Christ as a student pastor, as a protestant chaplain at a Catholic hospital, as a manager for a fair-trade Mennonite store and as the interim pastor at St. Paul’s Lutheran Church in Erie.

“I’ve kind of been all over the board. I’m a jack of all trades and master of none,” Anita said with a laugh. “It has shown me the diversity of Christ’s church and provided a great variety of experiences that have opened my eyes to grace in the world. I’m not the same person I was when I was singularly focused on denominational life within one track. I’m fairly comfortable with ecumenical conversations.

“I’m ready to make Lake Erie home for a while.”

With James taking the call at Wayside in December of 2015, Anita has had five-plus years to get to know the Lake Erie landscape. She has quickly grown fond of her interactions, which is why she is ready to make the region her latest home.

“The people and the churches,” she said when asked about what she loves about the presbytery. “I have found them willing to work with me and willing to work with one another. I’m excited to see what God might do in our midst. Most presbyteries are in transition right now and are trying to figure out what’s the way forward for the church of Jesus Christ in the time we’re in. I think it’s exciting to be part of that process.”

David Oyler has left Lake Erie in good hands upon his retirement after 17 years at the helm at the presbytery. Among his final projects was a long-term plan for the region that Anita is excited about implementing. But she has some other things in her sights before she can tackle that.

“The goal in the first year is to thoroughly and deeply understand this presbytery and the churches that are part of it,” she said. “I’m spending concentrated amounts of energy in this first year being in the churches as they re-open. I had to start out getting to know them from their online worship services and communities, but I think it’s going to be great as we get back into gathering in congregational life because that will give me a deeper understanding than I can get from online.”

Anita is looking forward to being able to take the pulpit in the presbytery’s sanctuaries to strengthen the relationships between the congregations and the presbytery. She knows this is a critical time for many churches as the country begins to take shape following the pandemic.

“I want to discuss where they want to go in their future and how they see themselves getting there,” she added. “I think that’s a really important conversation for a congregation, especially as we begin to come out of covid where the ground underneath many of these churches has shifted. They’re not sure who’s coming back and how to retain their online communities that have been nurtured over this past year. There’s a lot of uneasiness about what church life will look like in these next five years.”

Anita wants to help Lake Erie’s congregations get over this next hurdle but knows it will take time and lots of energy.

“It’s an opportunity for churches to evaluate what’s valuable to them in their church life,” she said. “I don’t expect churches to return to exactly the way it was prior to covid. I think that’s an unnecessary burden on congregations.

“I hope they will do the evaluative work of what’s still effective in our church life. How do we reach people so they understand and experience the love of Christ? What have we learned from the year of covid that we might transfer to the long-term plan?”

It’s a load of work that Anita and every other presbytery leader is facing these days, but one that she is focused on and willing to commit to as she begins her new call in Lake Erie. She knows she can’t do it alone and will lean on the friendship and support of those around her to help get it done. It’s a challenge she is – six denominations later – ready to face.

“I have felt God’s presence throughout most of this journey,” Anita said. “There have been moments when I have struggled to discern where I’m supposed to be and what I’m supposed to be doing. God is faithful throughout the process. I’ve learned not to be surprised at where God might show up in a new way.”