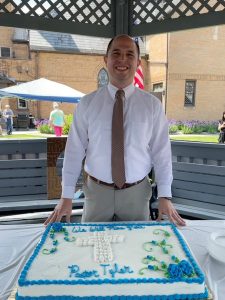 The First Presbyterian Church of Toronto, Ohio, gave the Rev. Tyler Bayless a proper sendoff in May when he preached his final sermon before heading to the Air Force to become a military chaplain.

When the Rev. Tyler Bayless was studying at Pittsburgh Theological Seminary, a military recruiter came to the campus. His grandfather had served in World War II, and Tyler had always felt pulled toward giving back to his country.

Fast forward to 2021 and Tyler is now getting that chance. Formerly the pastor at the First Presbyterian Church of Toronto, Ohio, he preached his final sermon there in mid-May and is moving on to serve as a military chaplain for the United States Air Force. A reservist for the past eight years, Tyler is excited for this new opportunity that has been on his radar for many years.

“I’ve always had this sense of service that is important to me. Going through high school I was a volunteer fire fighter and also worked on the ambulance. Service is something that’s always been important to me.”

As a reservist, Tyler got his feet wet for this next chapter when he was stationed in Texas doing ministry with a training unit for instructor pilots. It helped cement his call.

“I considered other branches but the Air Force – their mission, everything that they offer and their deployment schedules – fit my life and my hopes for ministry,” he said.

Tyler joined the Air Force in 2013 and a couple years later answered a call at First Church of Toronto, which is some 15 miles from where he grew up in East Liverpool. The experience he has gained there, and the friendships he has created, will remain very special to him.

“I have been able to form relationships here and they’ve loved me and my family and supported my family through the past six years,” said Tyler, a husband and father of five young children. “It’s going to be difficult moving on but after much prayer and discernment we really felt this is where God is calling me into ministry and also my family.”

He walked alongside the First Church of Toronto as it celebrated its 150th anniversary in 2019 and with the session helped created an online presence during the coronavirus pandemic to keep the congregation engaged during this unique time. These are just some of the many great memories Tyler will carry with him as he begins his next call.

Tyler’s experiences serving First Church of Toronto were a requirement for him to take the next step with the Air Force. 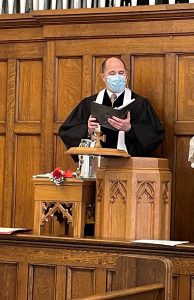 “The Presbyterian Council for Chaplains and Military Personnel is my endorser,” Tyler said. “They have requirements of how long they’d like you to serve and gain practical experience in a church before you are endorsed to serve on active duty. The military really wants you to have some practical, real-world experience once you have been ordained to gain knowledge and how to do all the things that a pastor does – preach, counsel, perform sacraments and offer funerals. They want you to have those experiences going into the military so you’re able to do all of those things and not learning quite as much once you’re on active duty.”

While preaching and performing other pastoral duties will certainly be part of Tyler’s call in the Air Force, he’s really looking forward to spending time with those who have answered a similar call.

“There’s so much that we do,” Tyler explained. “I’m looking forward to being able to serve more consistently with those airmen that I will be around, the opportunity to walk with military members through those life changes and challenges that they face when they are distanced from their family structure and also the challenges that come with deployment, moving and relationship stressors that come with it.”

In the coming weeks, Tyler will be stationed at a base in the United States to begin his service. There is potential for deployment and overseas assignments. It comes with the territory, and it’s a challenge he’s accepted and ready to take on.

“It was God who set up that chance encounter at the seminary between myself and the recruiter,” he said, “and all the ways that God has led me through the different places I’ve been to in the military and the experiences I’ve gained preparing me for what’s next. I think the experiences I’ve gained and the things I’ve been able to do with the military has really been God at work throughout the last 7-8 years, guiding me to where I am now to take this next step of serving in active duty.

“I’m appreciative of the church here for the past 5-6 years being able to do ministry with them and I’m excited to go on to see what’s next.”