Hoover finds her passion in Palestine

About five years ago, Sandi Hoover was on a sight-seeing trip through the Middle East, making stops in places like Greece, Turkey, Egypt and Israel. The final stop of the tour was in Bethlehem, and while she was taking in the scenery she bumped into a group of students from the city’s local university. 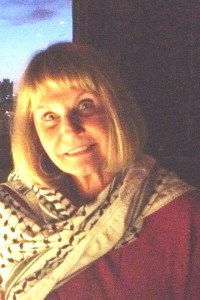 Sandi Hoover of Kreutz Creek Presbyterian Church in Hellam, PA, is, among other things, helping to teach English at a college in Palestine.

As they talked, the students shared their stories to Hoover, including what daily challenges and limitations they face growing up in a militarily-occupied country in the midst of the Israeli-Palestinian conflict.

“I’m a real believer that this was a very clear thing that happened to me,” she said, recalling the conversation. “This was not coincidental because I very much believe that I was supposed to end up doing what I’m doing.”

What Hoover’s been doing ever since that encounter is making about two trips per year back to Palestine working in the school system teaching English. Or she’s helping mothers in a refugee camp who have disabled children who do not otherwise receive support from their own country. It’s created a personal mission for the retired school superintendent who is an Elder for Peace at Kreutz Creek Presbyterian Church in Hellam, PA (Presbytery of Donegal).

“Anyone, no matter what your work is, it not only benefits another person but, more importantly, what it brings back into my life can’t be measured,” Hoover said. “What’s the old saying: I think God gave me just enough foolishness to believe I might be able to make a difference. No matter what kind gesture we make daily, it comes back to you so strongly. I guess that’s my goal – to have a better life myself through this work.”

Hoover began traveling to the Middle East with that sight-seeing trip in 2010 and has been back about eight times since, making as many as three trips in a year’s time. Her first return trip involved a six-week stay in Ramallah, the capital of Palestine, working with a private school where she taught English on a volunteer basis. One of her main projects was helping the students write essays for their college applications as these students generally went on to highly-rated international schools in Europe and the United States.

That experience led Hoover to apply for an Israel-Palestine Mission Network grant through the Presbyterian Church (U.S.A.). Through those dealings she was able to connect with a school that was not as established, a place Hoover felt was a better fit for her.

“I was looking for something that was a little less resourced, thinking perhaps my skills could be used with students who don’t have as many resources as the students I met in Ramallah,” she said. 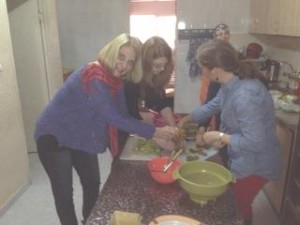 Sandi Hoover spends some time with the Noor Women’s Empowerment Group at the Aida Refugee Camp.

Hoover ended up connecting with Dar al-Kalima University, which means “House of the Word.” It is a small, fairly-new university that offers just Bachelor of Arts two degrees but several certifications and diploma degrees. Hoover has been working with them for close to three years, tutoring students in English and helping teachers learn how to teach the subject. Hoover recently spent six months there during the fall and winter of 2014-15 teaching a second-year English class.

“English really is the international language,” Hoover said. “So for these students, it’s very important. In Palestine, they really value their education, and learning English is a high priority.”

However, Hoover’s time in the Middle East hasn’t only centered on work with the college. She is also affiliated with the Aida Refugee Camp in Bethlehem where she assists women who have disabled children. Because the government schools in Palestine do not provide education for disabled children, and because the families don’t have money for private schools, they are in need of funding for teachers. Hoover obtained a $2,000 IPMN grant from the PC(USA) to help these families gain some of the money they need to educate their children.

Admittedly, it took Hoover some time to adjust to the ways of the Middle East. Because of the Israeli-Palestinian conflict, there is a constant military presence, and many of the freedoms people in the United States enjoy are not available in these Middle Eastern countries. 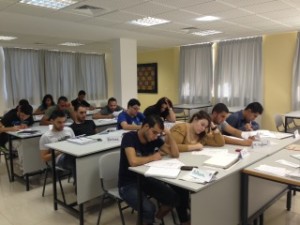 “The experience of being there and living in an occupied country, it still amazes me how limited one’s freedom is and how the things we are granted in our country are just denied,” Hoover said.

Hoover is planning to return to Palestine for several weeks in the spring of 2015 to work with the refugee camp and the disabled children who live there. With the help of the PC(USA) grant money, she has purchased a laptop computer and camera in the United States where it is cheaper and will be transporting those items to Bethlehem to give to the camp. It will help assist the mothers who have set up a cooking class aimed at teaching tourists how to cook native food. In turn, the money the women receive from the class helps pay for the private schooling their children need.

Dealing with all of the hardships and inconveniences of life in the Palestine area has given Hoover a greater satisfaction when she looks back on the work she has done there. It further strengthens the feeling that this was something she was called to do.

“This path is being cleared for me,” Hoover said. “It’s kinda like when God drops the sign down in front of your face and it says ‘Turn Here,’ you really should turn.”

Note: Hoover is also part of a group in Lancaster County that is working to bring a Palestinian minister from an Evangelical Lutheran church in Bethlehem, who founded the college Hoover teaches English at, to Lancaster for a conference on May 17. Church groups are invited to attend the forum that will be led by the Rev. Mitri Rehab as he speaks on the Israeli-Palestinian conflict. Hoover is also available to speak on the situation in the Middle East. She can be reached by email at shoovs@gmail.com.