For two days in mid-February, “Race and Christian Witness” and other race-related topics were discussed in Philadelphia. It offered a chance for people to be involved in conversations centered on racial equality and justice and how those talks need to be started in a church setting. 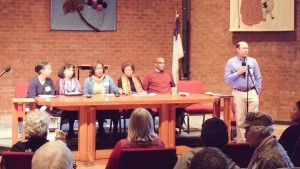 On hand for the Saturday portion of talks on “Race and Christian Witness” at the Church on the Mall in Plymouth Meeting were, from left, the Rev. Wonjae Choi, the Rev. Ruth Santana-Grace, Montgomery County Chief Public Defender Keir Bradford-Grey, the Rev. Bernice Warren and the Rev. Dr. J. Herbert Nelson. At right is the moderator for the talks, the Rev. Todd Stavrokos.

“I thought things went very well,” said the Rev. Kevin Porter, the stated clerk for the Presbytery of Philadelphia who attended two of the three events. “I was impressed at how honestly folks could share in a non-anxious atmosphere.”

The Rev. Ruth Santana-Grace, the executive presbyter for the Presbytery of Philadelphia who was also a panelist, agreed that the weekend talks were a success.

“We have worked hard over the past year to create forums that would allow for challenging conversations on issues that are historically difficult to discuss,” she said. “The tone of the conversations over the two days reflected that commitment on the part of our membership.”

The Saturday program was on race and the Sunday event centered on a Black History Month celebration. About 50 people attended each program, a number the Presbytery leadership was pleased with considering there was less-than-ideal weather and it was Valentine’s Day weekend. Porter felt having these discussions in a congregational setting was a big boost to the overall value of the weekend.

“One thing that I always believed is that communities of faith that are diverse have a wonderful opportunity to give something to the larger society by having these types of conversations in their midst,” he said. “In a faith community, you have folks that recognize that there’s something fundamental that binds us across the differences of race and class, that we’re blood brothers and sisters in Christ. Once you have those kinds of relationships, you can risk missteps, misunderstandings and still stay in a relationship. Whereas in other places in society, that’s hard to do.”

Saturday, the program began with a worship service that led into the conversation on reconciliation before small groups were formed to continue discussions on case studies about race. A main emphasis was on how false assumptions and preconceived notions can detract from the call toward race equality and the pursuit of human dignity.

The Rev. Greg Klimovitz, associate presbyter of the Presbytery of Philadelphia, was also in attendance.

“We must be willing to name and confess the tragic reality that we frequently view people through the culturally conditioned lenses fixed upon us by those in positions of power and privilege,” he said. “The Gospel dares us, on the contrary, to shed our temptation to profile and view all through our shared identity as the multicultural, multiethnic reflection of the image of God.”

A panel discussion that included local pastors, a public defender and Nelson ensued. Nelson was not the featured speaker during this time but offered valuable input to the talks, according to Klimovitz, who summed up the session with a quote from Nelson.

“Rev. Dr. Nelson challenged us, ‘If we, the church, are still boxing one another at the bottom, we will never be able to confront the real oppressive power struggle at the top,’” Klimovitz said. “Saturday morning was about our divisiveness and our reluctance to be reconciled as people in the church, which stifles our ability to engage our communities around us. If we can’t be a reconciled church, if we can’t be a reconciled people, if we can’t be reconciled disciples of a crucified Christ, we can’t expect to be about the work of the ministry of reconciliation in the larger world around us.”

The Saturday program set up the message for Sunday’s gathering where the talk shifted from race to education reform. Nelson suggested that in order to change the thinking of the people, the church needs to help in the education process in its own communities and cities, such as Philadelphia.

Porter addressed a second topic of discussion that Nelson brought to the floor on the second day.

“The thing that I would say J. Herbert brought into the Sunday discussion was that he linked the whole issue of black and white in America to some other social justice issues that aren’t traditionally linked with that like the current immigration debate,” Porter said. “He brought the scope in a way that helped us to think outside of our traditional boxes.”

Both Porter and Klimovitz agreed that there was plenty to think about and take back to the church to keep the momentum going on the subject of race relations and education.

“I thought it was a great start to what challenges us to be a longer conversation to bear some fruit in areas such as education in Philadelphia, which is a huge issue for us to move forward in our context here, as well as just ways that different congregations can find stronger bonds of doing mission with each other,” Porter said.

“The Presbytery of Philadelphia is very diverse both racially and also socio-economically, and in a metropolitan area such as ours we need to be mindful of how none of us can thrive when any of us are lacking access to things as basic as education,” Porter said. “The heritage of the Presbyterian Church in the realm of education is a long one, and I think the weekend celebration reminded us of that. The lack of educational opportunities for everyone in our region challenges us to think of how we can work together to bring that heritage to bear in our current context.”

Santana Grace added, “As we continue to identify ways that we can work together across theologies, race and culture, to bring healing and justice into some places, it is clear that the issue of educational injustice is one that binds us. We are hoping to find ways that we might give voice to this witness in the near future.”

Porter is calling for more programs and conversations like the one that was held in mid-February in Philadelphia.

“I think the weekend was a start of identifying fellow Presbyterians who recognize both the need for those conversations to happen – city, suburb, black, white, rich, poor – and the willingness to find fellow partners in that journey and link it together with the General Assembly’s call for initiative on education, which is one of the focal points of this last GA,” Porter said. “The time is right.”