Not every church has a budget big enough to support a full-time pastor. In fact, there are many small congregations that must rely on “lay leadership” to fill the pulpit on Sunday mornings and perform other duties usually associated with that of a called pastor, like visiting the sick and shut-ins. In many areas, the local seminary provides training for these lay people, who are commonly called commissioned ruling elders (CREs) in Presbyterian Church circles, to receive the proper training to be able to carry out these tasks. 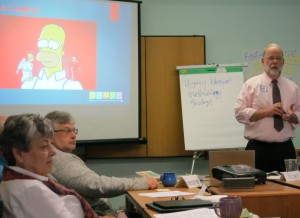 Bill Youmans leads a workshop that is part of CRE training in the Redstone, Washington and Upper Ohio Valley Presbyteries.

For years Pittsburgh Theological Seminary offered a Commissioned Ruling Elders Training program on its campus, but that ended in the spring of 2016. Knowing that there was now an urgent need for this type of learning in their region, the presbyteries of Redstone, Washington and Upper Ohio Valley came together to form a Training for Ruling Elders in Particular Pastoral Service effort that is equipping CREs with the proper tools. Those three presbyteries already comprised the Inter-Presbytery Leadership Formation (IPLF), which made the CRE training one of their first initiatives.

“This is an example of presbyteries coming together to make sure an essential need for leadership in small congregations is not only being addressed, but in a way that fits their needs and culture,” said the Rev. Skip Noftzger, the executive presbyter and stated clerk for the Presbytery of Redstone.

Skip had taught these classes at Pittsburgh Seminary in the past, so he became the coordinator for the program due to his experience surrounding it. Some presbyteries like Redstone and Washington had done some CRE training in the past, but with this need now present a steering committee between the three neighboring presbyteries was formed to discuss how they could create CRE training in their areas. The one thing they didn’t want to do was plan training that was identical to what had been done at Pittsburgh Seminary.

Download a flyer with information on the CRE training here.

“How do we do it in a way that both meets the needs of our congregations as well as builds upon the strengths that we have as presbyteries?” Skip said recalling a general question that surrounded the initial planning stages of the CRE training. “A fair amount of the content is similar but it’s offered in a different-style format.”

Beginning in the fall of 2016, there are now a dozen CREs involved in the course that runs in two-year intervals. Included in that time period are four mandatory core courses, several workshop options in which the CRE must participate in six, and four hands-on experiences. The core courses run 15 weeks, consist of face-to-face and online meetings and assignments, and include more of the “traditional, academic courses.” They are held every spring and fall and rotate in succession so that anyone can join at any time and still get the four courses they need in two years’ time.

“We’re excited about the people who are in the program for the particular vocational purpose of being commissioned, but we’re also excited about the opportunity to provide ongoing formative experiences for any of the people of our churches,” Skip said. “In that kind of way when we come together and both learn and wrestle together with what God is doing and can be doing, we’re in a better position to serve Christ and his Kingdom.”

Kandy Dunn is enrolled in the course in order to assist her husband, who is struggling with health issues, on Sunday mornings at First Presbyterian Church of Cameron, WV (Upper Ohio Valley Presbytery). She appreciates many aspects of the course, including the personal motivation she has received from the course’s instructors.

“I have found that the program is challenging and that I have learned a lot,” she said. “I like the flexibility of the on-line structure and the fellowship of the face-to-face meetings. Sometimes the pace felt a bit daunting, but then again, I haven’t been in school since I graduated high school in 1982. But the instructors have been fabulous in holding my hand when I have convinced myself that the task is too hard – that is Christian growth. I hope this program will make me not just a better-educated Christian, but a better Christian in general.”

John Snodgrass from Washington Presbytery agreed that the strong leadership of the program has been vital to his learning experience.

“The CRE program has been a valuable, enriching experience,” he said. “I have met people of faith and have received instruction from caring, committed individuals. It has also been a good Bible-learning interlude. I am looking forward to year 2 and hope to increase in faith and usefulness to the presbytery.” 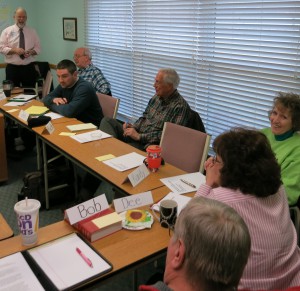 CREs from five presbyteries are or will be participating in a two-year training course that is equipping church leadership.

The workshops are held for 3-4 hours on Saturdays. They rotate between the three presbyteries, which also provide the instructors for the workshops. A person must participate in six, four of which are required (ethics/boundaries, pastoral care, polity, proclaiming the word). Each of the three participating presbyteries offers two different workshops in the fall and spring. This allows a CRE who may want to take a certain workshop to take it in a different area in order to get their required amount of workshops covered quicker than two years.

“This is not just about training ruling elders to be commissioned as pastors, it’s also available for on-going education formation and training within the presbyteries of these workshops for any ruling elder,” Skip added. “In Redstone, we had two or three workshops where the majority of the people participating in the workshop were not part of the CRE training, they were just ruling elders from our churches.”

The field experiences provide real “hands-on” mentored and supervised experiences with ruling elders in training before ever entering into areas of ministry on their own. While the core courses provide the biblical and theological foundations, these experiences also rely upon that foundation but, specifically, they build upon workshops in similar topics (church leadership, pastoral care, preaching, proclamation of the Word) where they were challenged to both reflect and participate in prior to engaging in supervised experiences.

“The goal is to have on-going training for commissioning new lay pastors but to also dovetail that with on-going education and formation for ruling elders within our congregations,” Skip said. “We can then put out people who are available to serve, particularly in areas of need, in smaller churches, where we don’t have teaching elders.”

The two-year program is $500 per year, or a total of $1,000 for the entire course. Costs are kept low because of the commitment of the presbyteries to help support the program, and a $12,000 Innovation Grant from the Synod of the Trinity assisted with the start-up costs. For more on the Innovation Grant, click here.

“This program has been a gift, allowing me to deepen my faith through these studies of the Word,” said Dee Kovach, who is serving at First United Presbyterian Church of Mingo Junction, OH. “Whatever God intends for my walk in his service surely has been enriched by this experience.”

The CRE training is open to anyone regardless of their presbytery affiliation. In fact, CREs from the Pittsburgh and Kiskiminetas presbyteries are or will be participating in the training.

Upon finishing of the two-year course, the student will receive a certificate of completion. However, it is still up to each individual presbytery as to whether they deem that this training meets the requirements for a ruling elder to be commissioned.

“The Lord has been bringing us together,” Skip said. “Between Redstone, Washington and Upper Ohio Valley, there have been some things that we have worked together on in the past. So within God’s providence it has laid the groundwork for some of these, which has been more intentional.

“We all recognize the need, not just within our churches but for ourselves to continue to grow and equip leadership, to serve the Kingdom not only where we are but in particular some of these places where we have smaller congregations who are in need.”