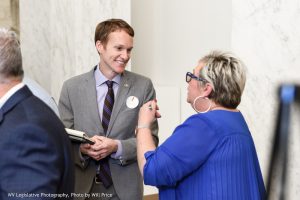 Senator Stephen Baldwin Jr. splits his time between the pastor at Ronceverte Presbyterian Church and being a state senator in West Virginia.

Imagine being a pastor in 2021, with the coronavirus pandemic changing many aspects of how church is now done and creating more stress on congregational leaders. Imagine being a politician in this day when you are either loved or hated based simply on your political affiliation.

For the Rev. Stephen Baldwin Jr., he doesn’t have to image either of these situations because he is living out both scenarios right now. Stephen is the pastor at Ronceverte Presbyterian Church (pronounced Ron-se-vert) in West Virginia as well as a Democratic state senator from Greenbrier County. Being able to meet both challenges is something Stephen has always aspired to do.

“I thought at some point I’d have to choose one or the other, but I’ve been very fortunate to serve a church that allows time for public service and sees public service as ministry. Also, the public I represent has been respectful of that and supportive.”

Stephen accepted a call at Ronceverte Church in 2007. With an eye toward politics, he became part of the Greenbrier County Board of Education from 2012-16 before joining the West Virginia House of Delegates in 2016. Being able to split his time between public office and the pulpit is something that was discussed during the search process at Ronceverte.

“There is a history within the congregation of being engaged in the community,” he said. “I would consider this a missional congregation. We just recently signed on to the Matthew 25 initiative because it was such a natural fit for us.

“When I interviewed in 2007 with the PNC (pastor nominating committee) I made it clear to them that that was my sense of call to ministry and public service, but I made a commitment to them that I was not going to do that for a while, that church was priority no. 1. I wanted to spend my time and energy focusing on the church for at least a couple of years, get engaged with the community and especially the church family.”

In 2017, Stephen was appointed to a vacancy in the state senate, a term that expired a year later. He ran for a second term in 2018 and was re-elected. Whether or not he’ll run for another four-year term at the end of 2022 is still up in the air. 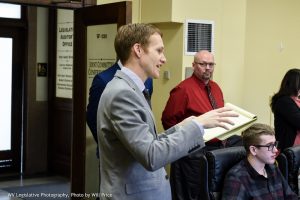 Stephen Baldwin Jr. addresses a group of high schoolers during their visit to the state capital in 2019.

“The call isn’t clear these days,” he said. “It’s always been very clear, and I do not have a strong sense of call at the moment. I’m out in the wilderness trying to figure out what God wants me to do.

“There’s a couple factors at play. There are existing projects and ongoing work I’d really like to see through,” he continued, noting flood relief from 2016, increased broad band internet access across the state and expanded economic development as a few. “One of the reasons I’m considering not continuing is the nature of politics these days. Everything is so bitterly partisan. The nation and our communities are so bitterly divided. It’s kind of a ‘You’re with me or against me, you’re on my side or you’re on the other side.’

Many of Stephen’s objectives while in congress are not unique, but he’ll admit that some of his goals may not be the same as those of other senators.

Stephen admitted that being a pastor who is in congress can create conflicting friendships, explaining that people think because of his theological background he should vote one way or another, and when he differs from that there can be a backlash.

“I tend to have relationships with some folks who are more active church-goers even if they are from a different party or a different part of the state,” he said. “That faith-based relationship will supersede some of the other typical lines that draw relationships in the legislature. And the opposite is true. I’ll have some folks who are avidly religious who don’t like my particular politics who don’t want anything to do with me because they think I’m not a true representation of what a Christian in public service ought to be. It runs the gamut.”

Many of these opposing viewpoints relate to social issues in society. It causes very emotional sides that put congress members and their constituents at odds with one another.

“It’s tough when people have opposing expectations,” Stephen said. “There have been some tough votes before us on divisive social issues. There was a vote on a bill involving transgender students’ participation in athletics. I gave a speech on the floor about that bill as to why I thought that bill was a bad idea from a religious perspective. I talked about how Jesus treated the lepers and how transgendered members of society today are in many ways lepers of our society and we need to be very careful about how we treat folks who are outcasts.

“There was a significant amount of faith-based vitriol after that because I think folks’ expectations were not that a pastor should be invoking scripture in opposition to a bill that many folks thought was a good idea. Social issues are sometimes a difficult crossroads.” 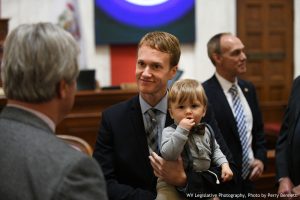 Stephen Baldwin Jr. holds his son, Harrison, during his swearing in ceremony as a senator in 2017.

Being a pastor and a senator can stretch a person like Stephen thin, but he has found ways to be able to continue to do both things that he loves at the same time.

“I’ve learned to be a much better scheduler,” he said. “I have to be very intentional about stewardship of time because they really are two full-time jobs. There are only so many hours in a day. I try to be very intentional about scheduling. It’s not a situation where I’ll spend two days a week doing one and two days a week doing the other. I’m doing them both every day all day. I manage that the best I can with a cell phone and being on the road a good bit.”

There are instances when Stephen could be two places at once, and when that happens, he has a decision to make. For him, it’s an easy choice.

“If it comes down to it, then the priority’s church,” he admitted. “The legislature frequently will have interim meetings during the off-season. For some odd reason they begin them on Sundays. I just don’t go. I tell everyone church is priority no. 1. I’m not going to attend legislative meetings on Sundays unless it’s a Sunday evening when all of my church obligations are done and I can be there.”

Stephen admits that being a state senator has affected his spiritual life in a positive way.

“My prayer life is much better now than it was previous to serving in the legislature,” he said with a chuckle. “It’s just out of necessity.”

It may sound stressful to have two highly demanding occupations going on at the same time, but for Stephen, he wouldn’t have it any other way.

“We don’t always feel like we know what the plans are that God has in store for us, but we trust that they’re good plans,” he said. “I feel very fortunate to have been able to live out this sense of calling that I’ve had to ministry and public service, hopefully in the same spirit of meeting people’s needs, building relationships and building communities up in this day and age where we seem to do more tearing down than we do building up. I feel very fortunate that it has worked out the way it has. I don’t have any explanation for it other than it must be part of God’s good plan.”