Members of Lehigh Presbytery share their report to the Synod Assembly on, among other things, what it means to be vital, innovative and faithful in their presbytery.

One by one, leadership from each of the Synod of the Trinity’s 16 presbyteries made their way to the front of the conference room in State College, PA, where the annual Synod Assembly gathering was being held. They held up beautifully colored and crafted posters that, through hours of discussion and contemplation, explained to those in attendance what it means to be vital, innovative and faithful in their individual presbytery.

The project was “homework” that had been assigned to the presbyteries’ commissioners and leadership teams in the months prior to the Synod Assembly. (To view each presbyteries’ work, click here.) While the responses varied, there were several overarching themes that showed through. Among them were “sharing, partnering, relating, relationships, vision, and encouraging in our bounds, outside our bounds and outside our denomination.” The reports helped establish a tone of partnering and friendship for the annual meeting.

Being able to “partner” and have “vision” in the Presbyterian Church (U.S.A.) are also part of the Matthew 25 invitation currently being stressed by the denomination. Monday evening, Rosemary Mitchell, the senior director of Mission Engagement and Support for the Presbyterian Mission Agency, presented information on this program, which is asking churches and mid councils to work to build congregational vitality, dismantle structural racism and eradicate systemic poverty.

Following the talk, congregations from each presbytery were named that are doing Matthew 25 work, and those named will receive a certificate from the Synod urging them to become Matthew 25 congregations. On Tuesday morning during new business, the Assembly voted unanimously to have the Synod become a Matthew 25 mid council. 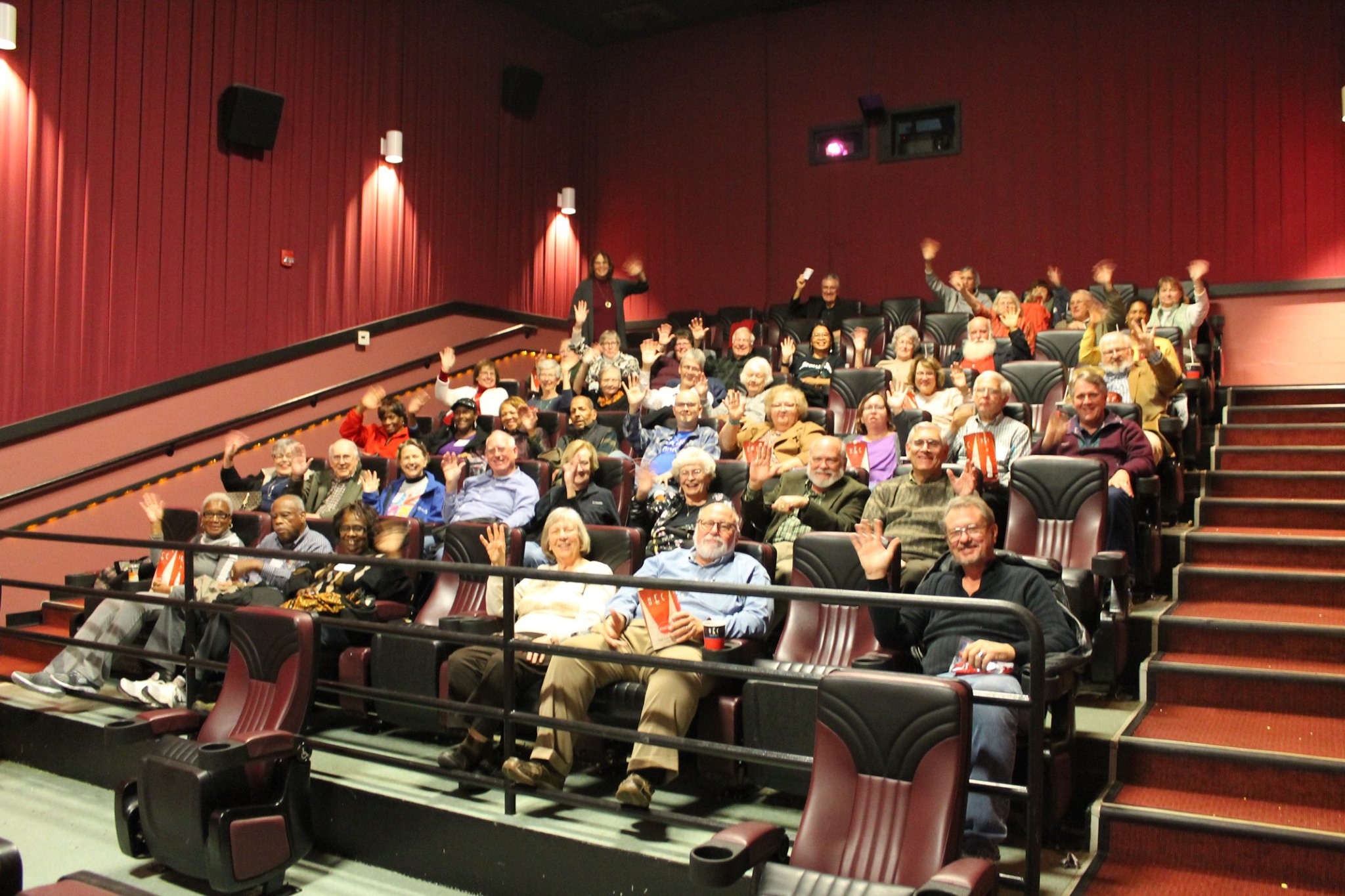 The Synod Assembly was given a unique opportunity to view the new “A Beautiful Day in the Neighborhood” movie one month before it arrives in theaters.

The work of the presbyteries and Matthew 25 efforts being targeted by the Synod coincided with the opening worship message delivered by the Rev. Ruth Faith Santana-Grace, who is the executive presbyter for the Presbytery of Philadelphia. She challenged the Assembly to stand and do God’s work in an age where negative news is greatly impacting the world. “Where are you hearing God say, ‘Rise Up?” she asked. “We were called in a time such as this to rise up.”

During the Governing Commission report, the Synod’s moderator, John Bolt (West Virginia), described a visit he and Synod Transitional Executive Susan Faye Wonderland had in Montgomery, AL, in January when they toured several exhibits that bring attention to the history of racism in the country. It was part of an invitation from synod executives of the PCUSA to be part of an ongoing discussion about race within the denomination. John also reported that the Synod received both positive and negative feedback to its statement in July that denounced the president’s social media remarks that criticized members of the U.S. House of Representatives and their hometowns.

Susan reported that this year’s regional gatherings in May and June, which had the theme “Silence is the Welcome Mat for Hate” that focused on hate speech and hate behavior, were successful in raising awareness for this ongoing issue. She then introduced the topic of “civility” as a focus for next year and mentioned the “Reclaiming Jesus Civil Discourse Curriculum” as an option for the Synod to begin some of its work in 2020.

Elsewhere, the body elected vice moderator Judy Angleberger (Beaver-Butler) to become moderator of the Synod in 2020, with Charlie Best (Carlisle) being voted the new vice moderator. Synod Stated Clerk Wayne Yost was also elected to a new three-year term that will expire in 2022. In other official business, the Synod’s per capita amount for 2021 will remain unchanged at $2.40. The 2020 figure of $2.40 was approved at the 2018 Assembly. 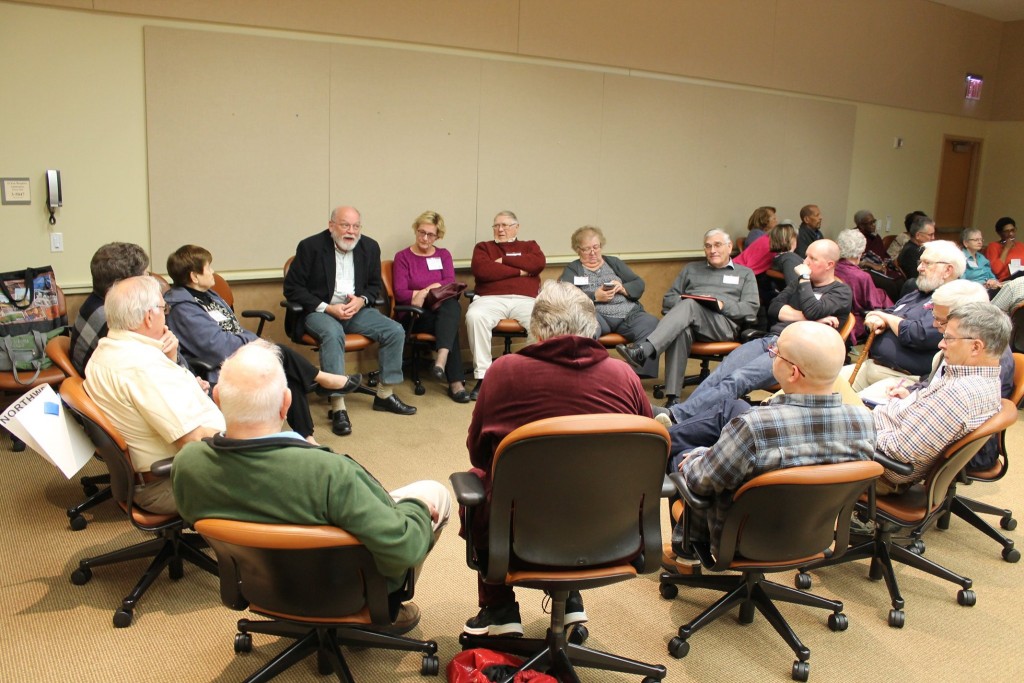 Members of the Northwest Region of the Synod of the Trinity discuss the Matthew 25 work being done in congregations in their region.

The Assembly gathering kicked off Sunday night with a Tree of Life Remembrance Service on the one-year anniversary of the tragic shooting that took the lives of 11 worshipers in Pittsburgh. The evening continued with a special viewing of the new Tom Hanks movie “A Beautiful Day in the Neighborhood” about the legacy of Fred Rogers, who was an ordained Presbyterian minister. The Synod received a unique opportunity to view the movie one month before it hits theaters.

Monday afternoon, the Assembly heard a recorded video update from Girard Presbyterian Church pastor Nicola Vitiello, whose church building was destroyed by fire in July of 2018. A similar video was shown that highlighted the “Hands Across the Street” program at Columbia (PA) Presbyterian Church that supports successful food service, clothing and housing ministries. Kathryn Threadgill, the PCUSA’s Coordinator for Vital Congregations, and Bryce Weibe, the denomination’s Director of Special Offerings, also were given time through videos to explain their current work.

Other actions and presentations included: 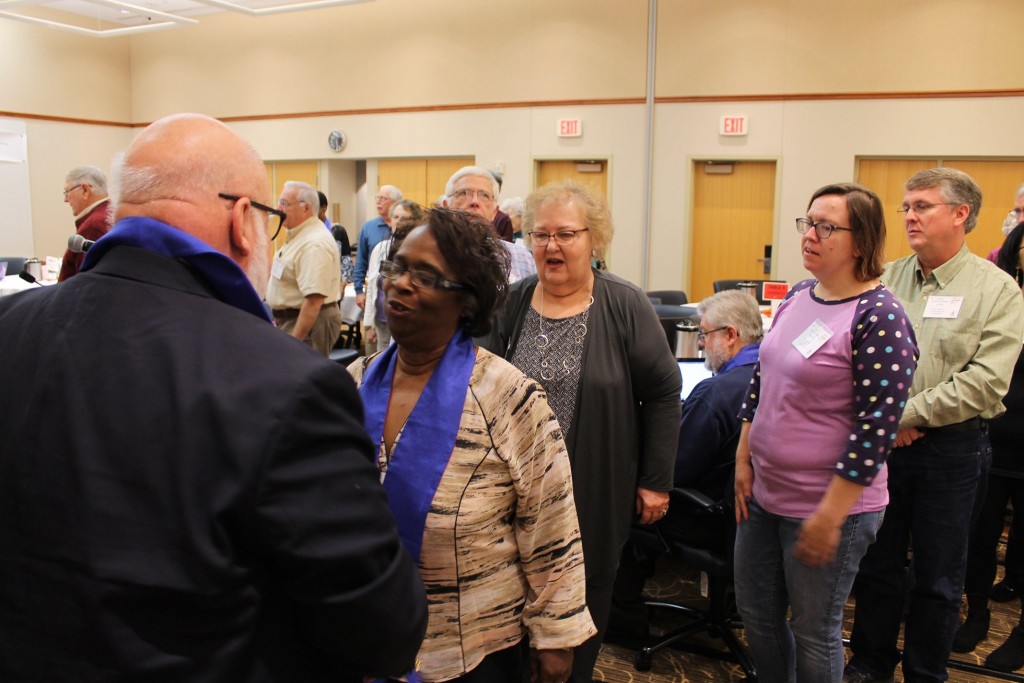 Synod Moderator John Bolt hands out a stole to commissioner Barbara Adams-Smelter (Philadelphia) on Monday morning at the Assembly.